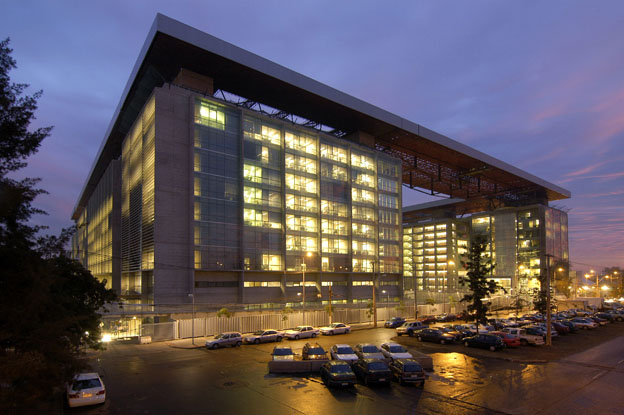 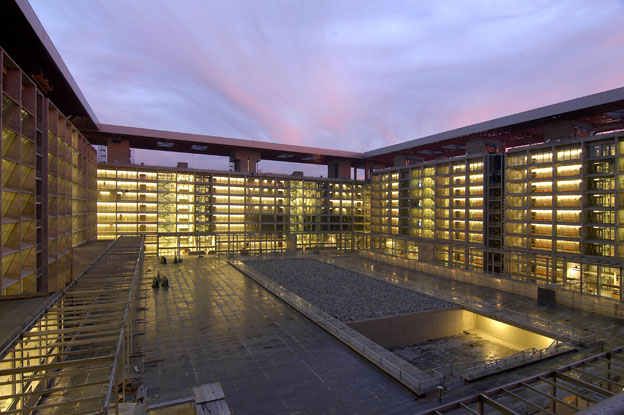 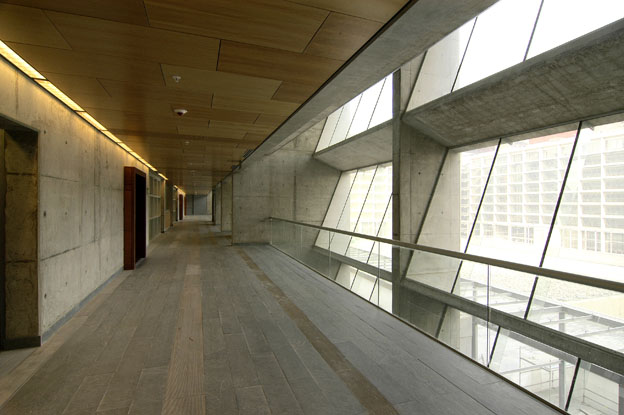 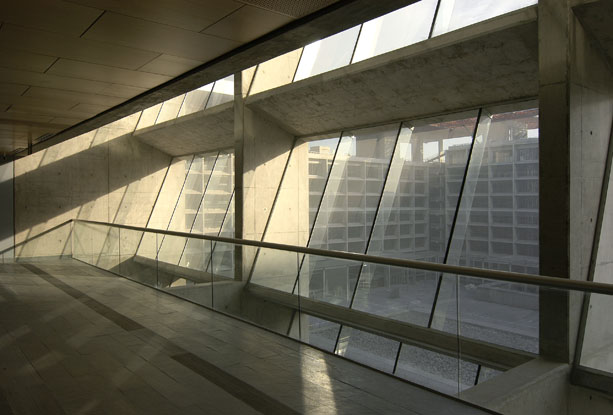 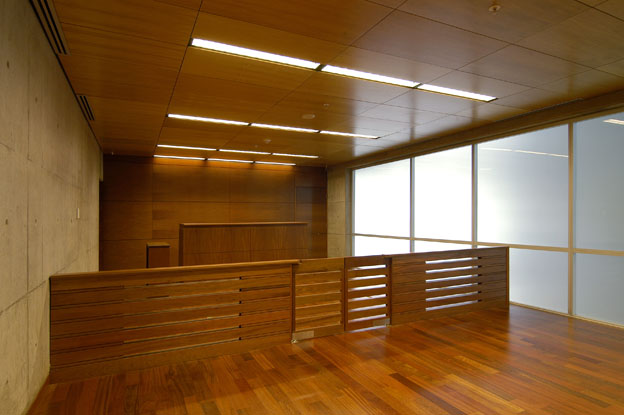 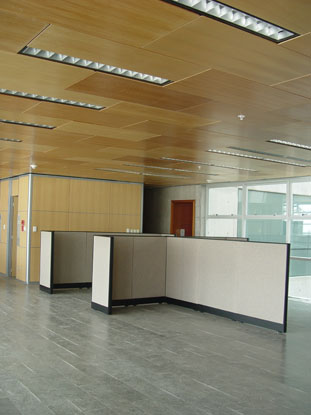 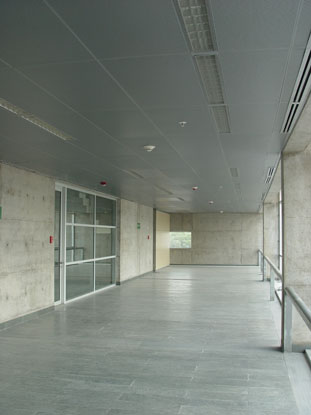 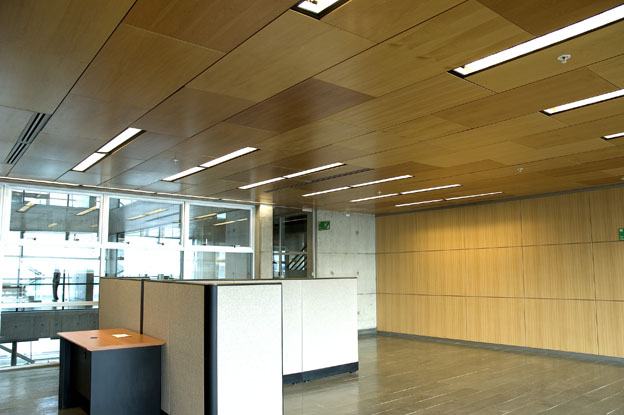 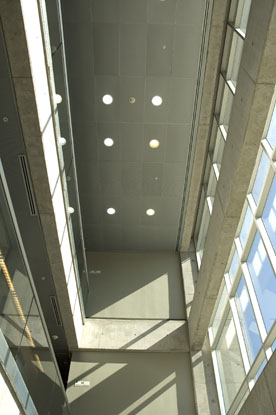 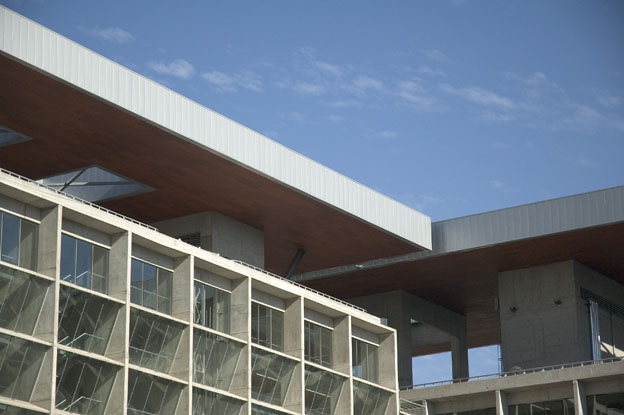 Arguably the most significant recent building project in Chile -- from an architectural, urbanistic, and even a societal point of view -- resulted from, of all things, the country's 2005 penal reforms. The Santiago Judicial Center is at once serene and powerful, monumental and humane, purposeful and abstract. Outside, the city enjoys a major new civic space, surrounded by eight glass-and-concrete buildings under a single ceremonial roof canopy, all reflecting a large civic plaza. The naturally ventilating façades enclose new courts, judges' chambers, and offices for the public prosecutors and defenders as well as municipal government. Large windows, angled downward, serve as a metaphor for the transparency of the legal process while also providing very real reflections of the Chilean citizens who visit the facility.

Echoing its noble public face, a dignified yet stripped-down modern aesthetic prevails within the structures. The pleasing, natural palette pairs concrete and glass with exposed metal and wood, including Natura wood ceilings and perforated acoustical planks by Hunter Douglas. Interior spaces were planned in a highly rational, sequential layering, wrapping private offices and chambers with lounges and patios, followed by public circulation zones and multi-story open areas. The visual effect, like the building operations, is elegant and efficient.

Yet it is outside its large doors that the judicial center makes its most palpable contribution to Chile's citizens. During a 2003 design competition spurred by the historic changes to the judiciary, many entries fixated on the image and symbolism of the public space -- it was, after all, touted as part of the country's bicentennial celebrations.

In an ironic twist, the winning scheme brought forward the talents of the Argentinean design firms Vila / Sebastián / Vila & Asociados Arquitectos (VSV) of Buenos Aires, collaborating with Chile's own Cristián Boza, José Macchi & Asociados Arquitectos. Little else was inconsistent, however. According to VSV principal Marcelo Vila, the architecture had to convey the significance and seriousness of their use, by means of "spatial emotion to convey monumentality" tempered with "respect for human scale, transparency and protection." Just as critical, says Vila, was the "intervention in the urban realm and urban identity."

The latter challenge was intensified by the site's particulars. Adjacent to a park, a Metro station, and a public jail, the plot was also bordered by two major boulevards and, nearby, two freeways. The large program, coupled with its diverse surroundings, demanded "significant compromise" in terms of urban design, say the architects.

The 400-foot by 270-foot plaza is lined by "a system of buildings" of a consistent 10-story height, topped by a continuous and seemingly floating roof plane of metal panels. According to the Chilean architects Cristián Boza and José Macchi, the ceremonial and civic qualities of the large rectangular plaza were extended through the building mass to a new esplanade parallel to the boulevard, creating a major point of access and giving the area a new character. This move also responded to climate: by opening the plaza towards the north and inserting a large reflecting pool, the architects allowed breezes and natural humidification to condition the open public zone. Tall trees soften the plaza, filtering the sun along primary access routes.

The massing of the buildings creates an entry atrium on the street formerly known as La Fábrica, now dubbed Boulevard de la Justicia. In effect, it transforms the entry into a pedestrian boulevard, connecting the plaza to an adjacent park. The main façade of the complex contains two separate buildings for the public defender and administration. From the central plaza, visitors can access the six other buildings, which house the courts and judges' chambers. Entrances protrude below the angled window walls, leading to a two-level, glass-enclosed hall. From there, visitors' eyes are drawn upward as they enter the 10-story-tall spaces that accommodate vertical circulation serving all the public spaces above. Judges and administrative areas, however, are hidden behind a "protective screen" -- hard walls of subtly tinted concrete and plaster.

The abstracted symbolism of the reflection and transparency -- and unity, as implied by the fly roof -- are well subsumed to the meticulously detailed, minimalist architecture of the judicial center. Enhancing the concrete surfaces are wood-finished ceilings by Hunter Douglas. Paired with wood windows and doors, they give the architecture a natural humanism. The overall design and material palette also addresses maintenance concerns for a complex intended to support low-cost operations for decades to come. Natural daylighting and ventilation are used wherever possible. The ceiling systems provide easy access to the ceiling plenum as well as long-term acoustical performance.

Hailed by critics as a "powerfully unified complex," the Center provides impressive facilities befitting the country's reinvigorated legal system while redefining and reordering the public realm. Inspired by more than its host government's penal reforms, Centro de Justicia is built proof of Chile's promising future, and the promise of its people.