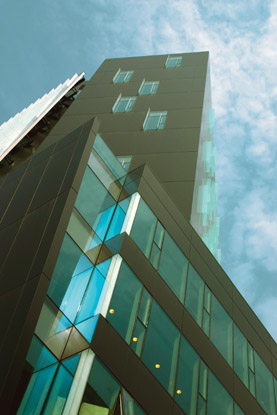 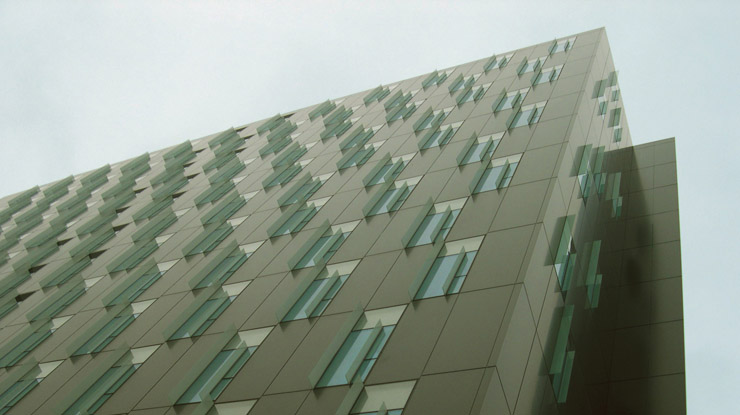 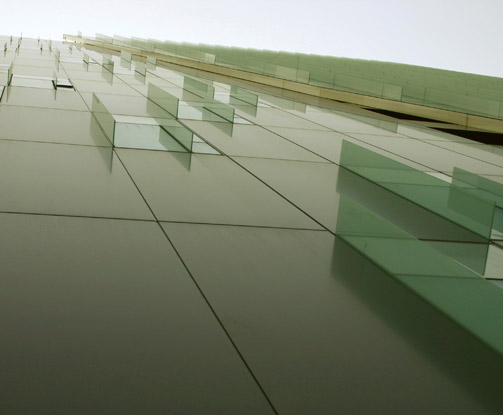 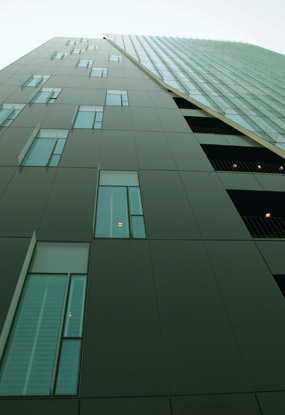 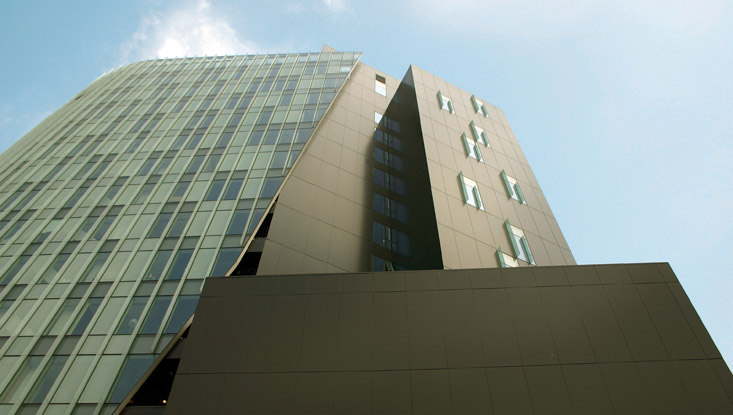 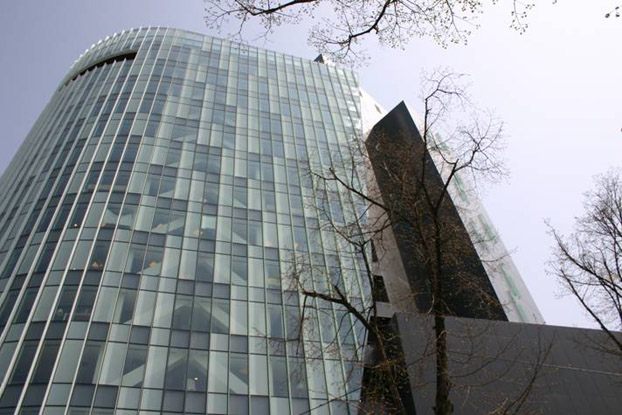 As the tallest and arguably most compelling office block in Bucharest, Romania, the Charles de Gaulle Center Tower stands out. This is no small feat in a city known for its vibrant mix of historical, interbellum, Communist-era and contemporary buildings. Yet new works like the Charles de Gaulle, designed by Bucharest- and New York-based Westfourth Architecture, recall the city's emergence between World War I and World War II as an architectural powerhouse, earning it the monikers "Little Paris" and "the Paris of the East." Bearing the Hunter Douglas facade system QuadroClad, this new, $50 million tower brings a distinctive, shimmering apparition to a city that has lost many architectural treasures to earthquakes and war.

In fact, the building of the Charles de Gaulle caps off a decade of renaissance in Bucharest, in which the capital city has bounced back as a center of arts, culture, and Romanian mass media. Only 18 stories and 69 meters tall, the new building still towers over the diminutive and largely historical structures surrounding it. Conceived by Westfourth Architecture's Vladamir Arsene as a "veiled glass tower," the building reveals itself in layers: A convex glass curtain wall is anchored onto a dark grey aluminum base and several imposing, rectilinear masses of QuadroClad panels. These blocks on the facade appear to support curved planes of glass above them.

According to Arsene, the interiors echo this exterior play of materials and forms: A 16-story atrium soars above its glass floor, topped by an "inverted skylight" suspended from the steel roof structure. The lobby walls are finished in clear and translucent glass panels, illuminated from behind - also echoing the pattern of the curtain wall. The atrium's solid side, like the aluminum QuadroClad walls on the exterior, project a counterveiling pragmatism.

In fact, the building is highly pragmatic - and smart. Built out to its lot line (and excavated to hold five underground floors for parking), its 40,000 square meters of area on large, open floor plates make it not only the largest office building in Romania (and one of the largest in Eastern Europe). But the building also features a tenant-friendly format. According to Arsene, the Class A building also has the fastest elevators in the country, hitting a top speed of 2.5 meters per second.

More important, however, is the building's ability to transform the image of its host city. Winner of the European Steel Design Award and the 2005 Annual Award for Romanian Architecture, the Charles de Gaulle succeeds by becoming an architectural paradox: its modernity conflicts with Bucharest's traditional building stock; it's eclectic interior contrasts with its purpose; and while the building's image projects both strength and stability - the Hunter Douglas facade system - as well as the pure beauty, preciousness, and apparent fragility of the building's glass fins and faceted window walls.

Yet the Charles de Gaulle Center Tower isn't just a mix of handsome facade treatments. Westfourth Architecture focused attention on making it practical in design and efficient in its use of materials. This emphasis on sustainability is admirable given the structure's seismic resistance, ensured by a "top-down" construction technique for durability and safety. (This is a necessity in Romania, which is hit constantly by earthquakes. Following a 1977 event measuring 7.4 on the Richter scale and causing many casualties, the Romanian government imposed tough construction standards, spurring the demand for innovative architectural approaches.)

Westfourth Architecture chose the dark grey Hunter Douglas QuadroClad metal cladding system to deliver a complete, integrated solution of both panels and suspension framing. The lightweight skins are fused to an expanded honeycomb core of aluminum, making the panels extraordinarily strong and flat. They also offered a powerful contrast - the dark, opaque panels and the light, translucent fins - reinforcing the architect's idea of juxtaposing apparent opposites.

On the west facade, the parabolic glass curtain wall is more like a jewel, wrapping around the convex side of the building and stretching its full height, articulated with a continuous flow of translucent vertical fins that add an ethereal touch to the building and serve as a solar diffuser. But rather than visually covering the structure beneath, Arsene exposes the steel endoskeleton. The movement of the sun and the play of light on the curtain wall create a glimmering sense of movement, casting shadows from the fins and reflections glass panels.

Much like its exterior image, the interior of the Charles de Gaulle Center Tower projects contradictory qualities: the low portico that opens into the soaring atrium, for example, and the club-like atmosphere of the lobby, with minimal lighting except for its brightly illuminated fluorescent floor and ceiling panels. Colorful, illuminated wall panels are marked with the words "Lorem Ipsum." A bank and a cafe invite passersby inside.

And the people are coming in droves. The Charles de Gaulle Center Tower is conveniently located where several of Bucharest's main traffic arteries meet a large, circular city plaza that esplanades to Herastrau Park. This places a noteworthy and monumental building aside one of Europe's largest green parks - a panoramic view for both those in the park and those lucky enough to visit the tower's upper-story loggia.