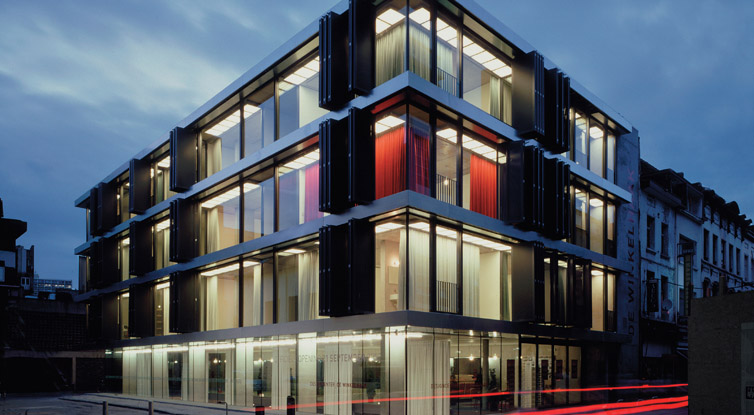 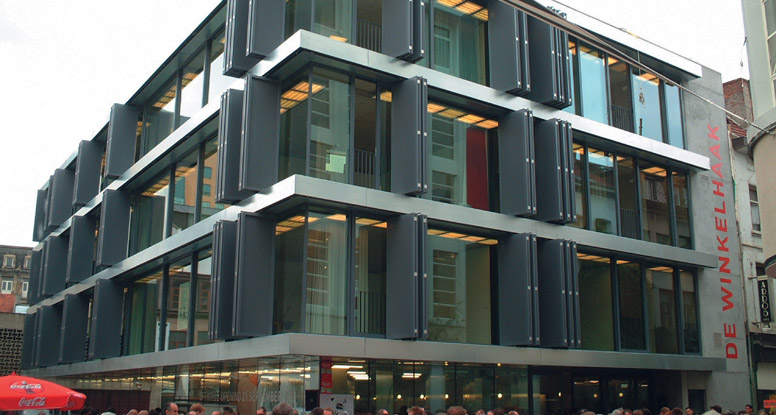 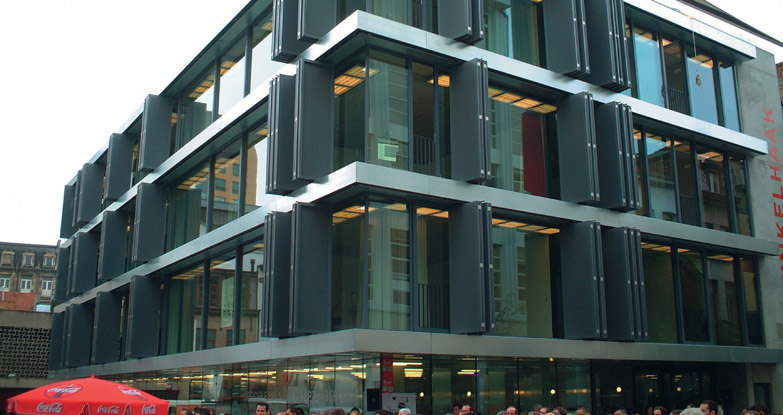 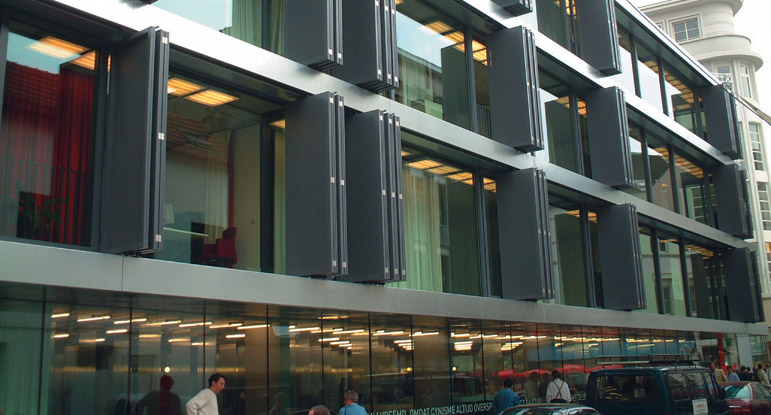 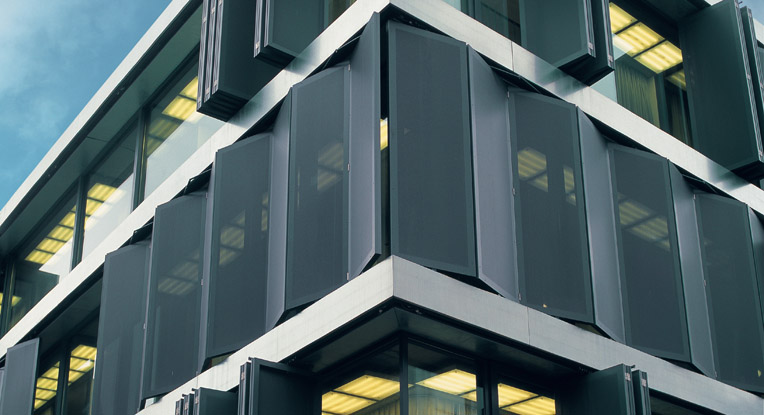 The meaning and function of the building facade has become a fixation for the architectural avant-garde in recent years. Coupled with new enabling technologies like robotic actuators and LED displays, designers have explored the facade's role as a communication device or as a self-transforming building system that responds to changing occupancies or outdoor conditions. In many cases, these modern enhancements have brought new capabilities and expressive effects to such basic facade elements as shutters and canopies.

A few early experiments have helped point the way. Antwerp's public/private design center De Winkelhaak, for example, is a unique example. The project was conceived to promote new Belgian designers and their innovative products. Just as important, it was intended to spur a rejuvenation of its surrounding neighborhood, which was suffering from prostitution, drugs, crime and a lagging economy. Sponsored by local, national and European governments, De Winkelhaak would lease out 18 studios to promising designers, with adjacent offices for staff members to coach and promote the resident firms. Also programmed were a design shop and exhibit areas to showcase the latest Belgian innovations.

"The design center functions as a generator of activity and creativity," the architects Coby Manders and Philip Pittillion write. Internally, an open layout sparks interaction among designers from different disciplines. And the building envelope expands this role out into the community, helping the new center establish its place as a beneficial neighborhood asset.

The architects chose an economical concrete-and-glass structure as much for its sustainable qualities as for its minimalist appeal. The box was then overlaid with a layer of folding shutters of perforated aluminum sheet, fitted with a system of motors and automatic controls. Custom-designed by Hunter Douglas Contract's "Limelight" solar-control experts, the electrically driven shutters are fully automated during the day, providing solar control as well as privacy. Curtains behind the wall allow occupants to more readily tune their own daylighting or privacy levels. Request technical specifications on this system.

The architects and client viewed the aluminum folding screens in both pragmatic and metaphorical terms. Along the southern exposure, the blinds greatly limit heat gain, slashing air-conditioning loads. Yet the system also allows for creative expression: The space between floor slabs becomes billboard, display case and shop window for the 18 renters. "Exactly because of the individual uses and the role of nature, there arises an uncontrolled play of the facade, which can deliver very surprising images for the surrounding streets," say the architects. "Inventive renters manipulate the layers as they wish." The result is sophisticated, expressive and intimate. In spite of the resident designers" hodge-podge of new products, the building projects the image of a harmonious cluster.

The folding screens also play a social role for De Winkelhaak's local context. As the architects note, the area's residents never asked for a design center. The sudden appearance of such a "prestigious building" ran the risk of "increasing the contrast between rich and poor," so that "the neighborhood would not be interested in its existence." Anticipating such a backlash, the architects conceived its transparency and visibility through the building's walls "in such a way that you do not have to enter the building to see what's going on inside." Coupled with the design center's open-door policy and a calendar of free events, the visual openness achieved with the architectural solution demystifies the activities within the studios and exhibition space. Its workings become community property.

"The designers communicate with the neighbors through the expressive facade and bring about a renewed commitment and trust," say the architects.

That mutual confidence has been matched by a gradual turn of luck in the immediate area. City officials had hoped that De Winkelhaak would help transform the old station neighborhood into Antwerp's new design district; local shopkeepers, it was presumed, would benefit from the new audience attracted to the design scene. The strategy was followed by new investment almost instantly, triggering a slew of renovations and businesses openings when the design center was inaugurated in 2002.