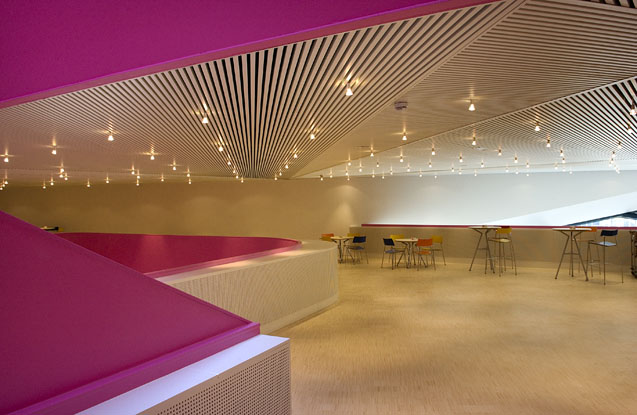 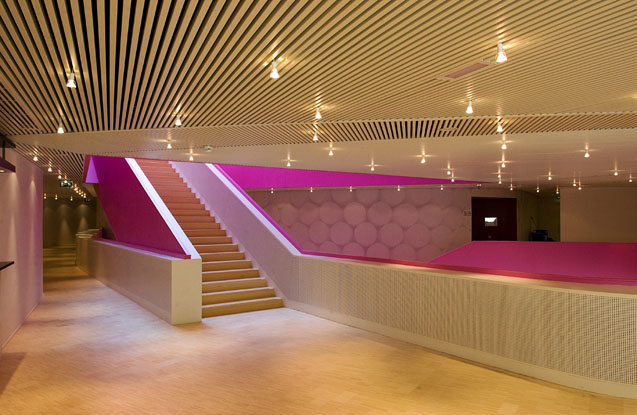 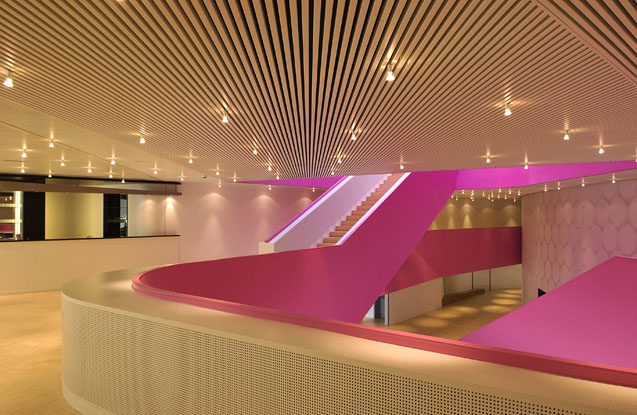 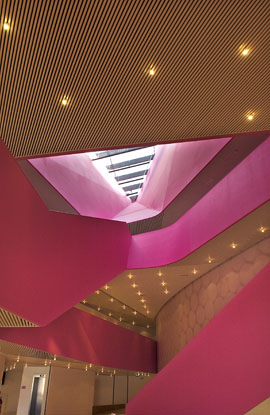 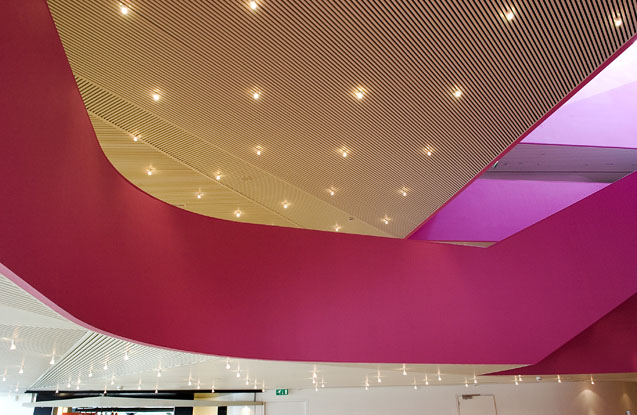 UNStudio's Agora Theatre in Lelystad, the Netherlands, stops passersby dead in their tracks. The design "built upon the idea of integrating the dramatic arts and new media with architecture" does much more than that. It creates an enigmatic, futuristic sculpture. It intertwines interior performance hall with exterior form, dashed with eye-popping colors: tangerine, cherry, lavender. This is architecture as theater, clearly, yet it is also the rare theater that truly emerges as architectonics.

What inspires the off-kilter, aluminum-clad form, glittering with orange, yellow and red panels on the outside, are the two interconnected performance spaces inside, separated by a soaring foyer and grand staircase. Illuminated by skylights and sparkling high-intensity lighting, the dynamic, hot-pink anteroom serves as an unlikely wayfinding device. The stair and foyer direct visitors to the auditoriums or to meeting halls nearby. Surrounding the colorful spiral of the stair, however, are quiet, calm corridors featuring Luxalon® metal ceilings by Hunter Douglas. The monolithic quality of the walls and striated ceilings is serene and smooth, with the superb acoustical control one demands from a theatrical venue.

The architect Ben van Berkel of UN Studio selected the ceilings as much for their linearity and sculptural qualities as for the clean detailing and acoustical performance. "At Agora, theatrical drama and performance are not restricted to the stage and to the evening," he says, adding, "the party should start in the foyer." While the Luxalon ceilings and white walls contrast dramatically with the foyer's exuberance, it is precisely that counterpoint that serves van Berkel's concept so well.

In the deep-red main theater, for example, the line of the balcony winds its way to a prismatic, faceted wall. The chaotic bas-relief recedes the instant the house lights dim, yet between acts provides stark contrast to the darkened stage below the proscenium arch. In this way, the dramatic focus shifts with the living use of the building. The same is true of the structure itself, which illuminates from within at night, making it a highly visible landmark. Commissioned by the ambitious town of Lelystad, the 7,000 sq. meter building opened in late 2006. In addition to the theater -- with two halls and a multifunctional space -- there's a restaurant and bar for theatergoers, a fly tower, dressing rooms, rehearsal halls, and more to round out the cluster of cultural and social uses.

The architects allow the building to express all these internal volumes compacted together, all pushing on and seemingly ready to protrude through the envelope's orange sheen, gasping for breathing room. The result is as dramatic as it sounds, a result that pleases the architects. The principals of UNStudio, van Berkel and Caroline Bos, have been known to compare architecture and theater."The product of architecture can at least partly be understood as an endless live performance," they wrote in 2006 in Design Models.<PAGE> "As the architectural project transforms, becomes abstracted, concentrated and expanded, becomes diverse and evermore scaleless, all of this happens in interaction with a massive, live audience."

In some places, the Lelystad facility overtakes its occupants with ruthless intensity. Yet in others, it makes the arts patron an object, as if she were the star performer herself. This is true in the visually relaxed, Zen-like foyer spaces, where the linearity and clarity provides the ideal counterpoint to the dominant colors and kinetic verve.