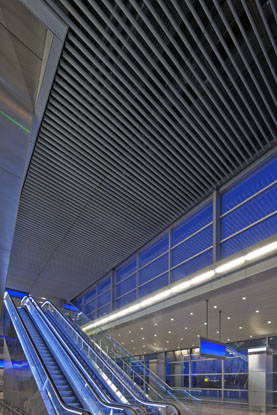 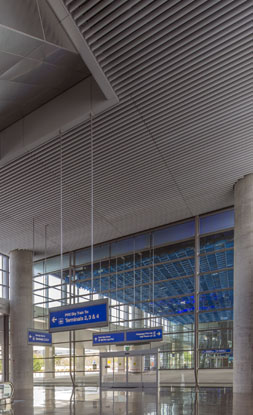 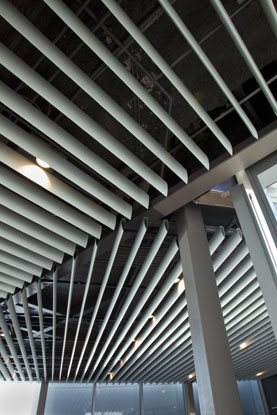 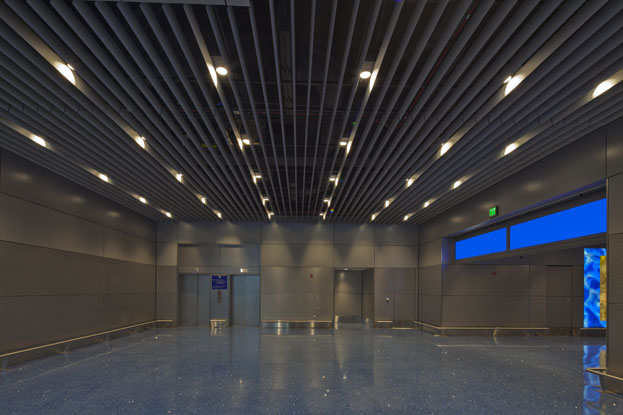 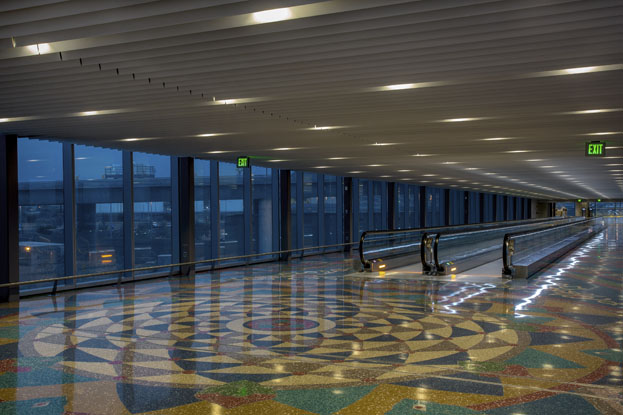 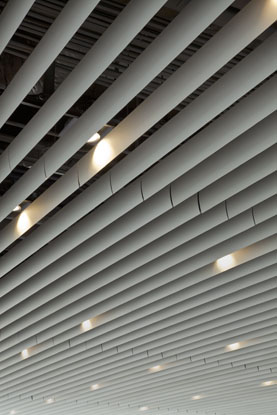 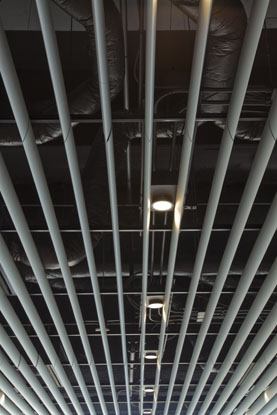 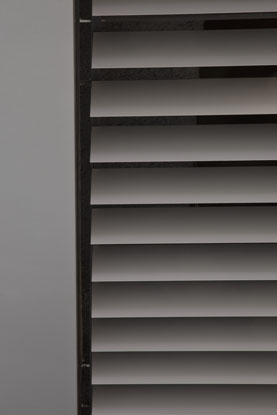 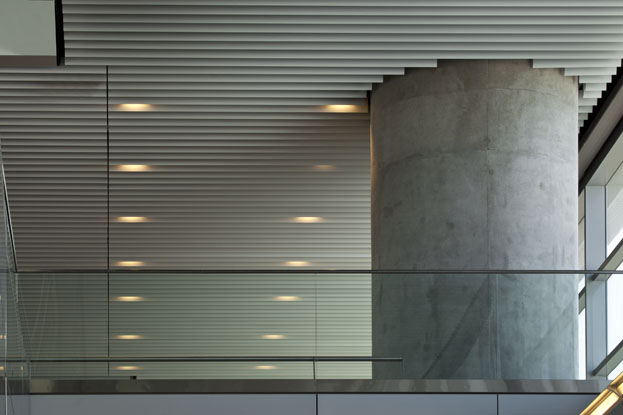 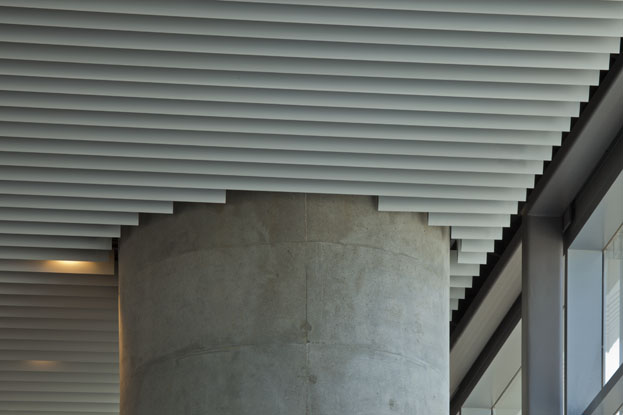 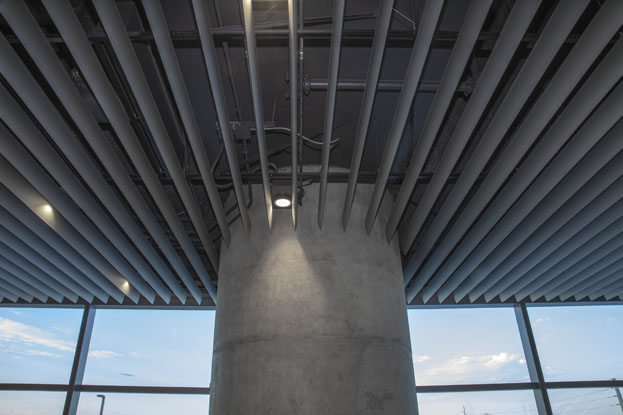 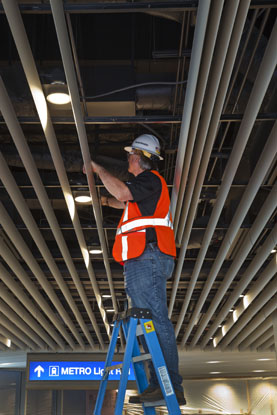 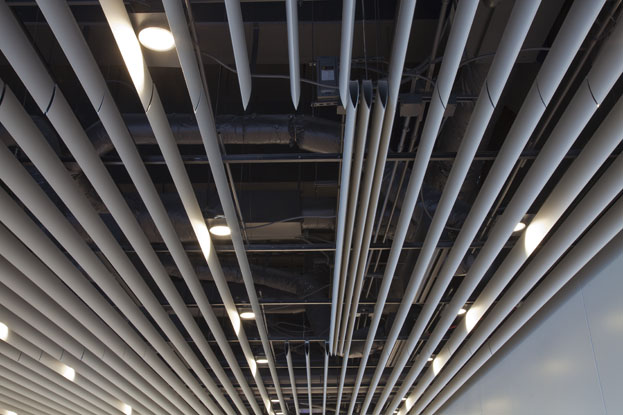 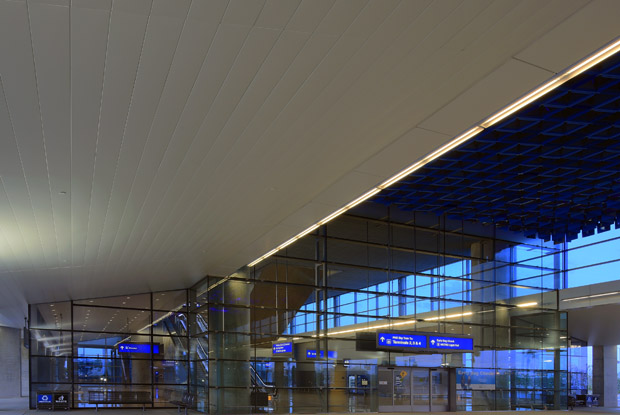 HOK, architects of PHX Sky Train™, a new airport transit system, faced the challenge of creating a baffle ceiling that would deliver precision installation, robust performance, full accessibility, and a client-specific aesthetic. Collaborations with the architect, the subcontractor T-P Acoustics, and Hunter Douglas Architectural Products (HDAP) led to a successful downstream implementation and installation of the new ceilings in what has become the city’s most recent landmark.

HOK’s call to arms 18 months prior to construction was to link light rail to the first of four airport terminals. They had to create “a 100% point accessible, yet robust and precise baffle ceiling” – but one did not exist in the marketplace. With concurrent development activities, T-P Acoustics and HDAP created a series of 12 mockups. As the mockups grew more sophisticated, they drew input from the architect, general contractor, electricians, and HVAC, signage and security trades.

The key element with the baffle ceiling system became the subcontractor’s idea and prototyping, which led HDAP to develop a sliding attachment device compatible with standard 15/16” t-grid. A client-specific design of extruded aluminum baffle profiles was attached that could span 24’ -- and slide open to create 8’ x 24’ point access openings -- without removing or lowering a single baffle.

The baffle ceiling system featured a 6” aero-shaped baffle profile at 8” spacing, which allowed for necessary plenum masking with ceilings at 10’, 16’, and up to 40’ in height. The material allowed for appropriate LEED credits and budget constraints.

The large scale, 33,600 SF baffle ceiling system became a main feature of the new landmark station. The baffle application incorporated a floating design in all directions, along with changes in baffle direction to accommodate transitions in pedestrian flow and space function. A key transition took place at the juncture of a 500’ walkway from the light rail station to the airport transit station.

While robust, given extruded aluminum baffles, the ceiling’s precision element, reflecting the clean, precise nature of an automatic train operation, was equally important. This required manufacturing and field cutting of the baffles to maintain perfect alignment at floating perimeters (no trim elements), cuts around large columns, and most importantly, the key ½” reveal between baffles as no splice was used. The large-scale ceiling design highlighted many long runs of this reveal, one being the entire 500’ length of the walkway connector.

All these design criteria had to be achieved at ceiling height levels from 8’ to 40’ with constant interaction with electrical, HVAC, signage, security, and other trades, who repeatedly were able to utilize the large-opening point access system to access the plenum.

Other ceiling applications also required development and implementation, including a pedestrian ground-level exterior-to-interior transition featured an inviting airplane wing’s 37,000 SF configuration. A 12” wide linear plank ceiling product was chosen by the architect to allow for long panels up to 19’. The second floor train platform called for 11,600 SF of curved torsion-spring type ceiling system to maintain the station’s iconic tubular shape.